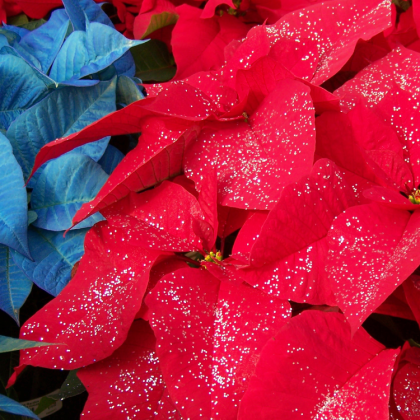 The poinsettia was made widely known because of a man named Joel Roberts Poinsett (that's why we call them Poinsettia!)

Why are poinsettias a Christmas plant?

The reason we associate poinsettias with the holidays comes from an old Mexican legend. A young girl named Pepita was sad that she didn’t have a gift to leave for the baby Jesus at Christmas Eve services. Her cousin tried to comfort her and said that Jesus would love any presents from her, even the smallest one. With no money to buy a real gift, Pepita picked a bouquet of weeds that she walked past on the way to church. (Other versions of the story say an angel came to her and instructed her to pick the plants.) When she got there, she left the weeds at the bottom of the nativity scene. All of a sudden, the weeds transformed into beautiful red flowers. This is why Christmas colors are red and green.

Poinsettia plants are native to Central America, especially an area of southern Mexico known as 'Taxco del Alarcon' where they flower during the winter. The ancient Aztecs called them 'cuetlaxochitl'. The Aztecs had many uses for them, including using the flowers (actually special types of leaves known as bracts rather than being flowers) to make a purple dye for clothes and cosmetics and the milky white sap was made into a medicine to treat fevers. (Today we call the sap latex!)

The poinsettia was made widely known because of a man named Joel Roberts Poinsett (that's why we call them Poinsettia!). He was the first Ambassador from the USA to Mexico in 1825. Poinsett had some greenhouses on his plantations in South Carolina, and while visiting the Taco area in 1828, he became very interested in the plants. He immediately sent some of the plants back to South Carolina, where he began growing the plants and sending them to friends and botanical gardens.

One of the friends he sent plants to was John Bartram of Philadelphia. At the first Philadelphia flower show, Robert Buist, a plant's-man from Pennsylvania saw the flower and he was probably the first person to have sold the poinsettias under their botanical, or latin name, name 'Euphorbia pulcherrima' (it means, 'the most beautiful Euphorbia'). They were first sold as cut flowers. It was only in the early 1900s that they were sold as whole plants for landscaping and pot plants. The Ecke family from Southern California were one of, if not, the first to sell them as whole plants and they're still the main producer of the plants in the USA. It is thought that they became known as Poinsettia in the mid 1830s when people found out who had first brought them to America from Mexico.

There is an old Mexican legend about how Poinsettias and Christmas come together, it goes like this:

There was once a poor Mexican girl called Pepita who had no present to give the baby Jesus at Christmas Eve Services. As Pepita walked to the chapel, sadly, her cousin Pedro tried to cheer her up.

'Pepita', he said "I'm sure that even the smallest gift, given by someone who loves him will make Jesus Happy."

Pepita didn't know what she could give, so she picked a small handful of weeds from the roadside and made them into a small bouquet. She felt embarrassed because she could only give this small present to Jesus. As she walked through the chapel to the altar, she remembered what Pedro had said. She began to feel better, knelt down and put the bouquet at the bottom of the nativity scene. Suddenly, the bouquet of weeds burst into bright red flowers, and everyone who saw them were sure they had seen a miracle. From that day on, the bright red flowers were known as the 'Flores de Noche Buena', or 'Flowers of the Holy Night'.

The shape of the poinsettia flower and leaves are sometimes thought of as a symbol of the Star of Bethlehem which led the Wise Men to Jesus. The red colored leaves symbolize the blood of Christ. The white leaves represent his purity.

The Poinsettia is also the national emblem of Madagascar.

What do Poinsettias Symbolize?

The poinsettia is a commercially important plant species of the diverse spurge family. Indigenous to Central America, it was described as a new species in 1834. It is particularly well known for its red and green foliage and is widely used in Christmas floral displays. It derives its common English name from Joel Roberts Poinsett, the first United States Minister to Mexico, who is credited with introducing the plant to the US in the 1820s. Poinsettias are shrubs or small trees, with heights of 2 – 13 ft. Though often stated to be highly toxic, the poinsettia is not dangerous to pets or children. Exposure to the plant, even consumption, most often results in no effect, though can cause nausea, vomiting, or diarrhea.

Wild poinsettias occur from Mexico to Guatemala, growing on mid-elevation, Pacific-facing slopes. One population in the Mexican state of Guerrero is much further inland, however, and is thought to be the ancestor of most cultivated populations. Wild poinsettia populations are highly fragmented, as their habitat is experiencing largely unregulated deforestation. They were cultivated by the Aztecs for use in traditional medicine. They became associated with the Christmas holiday and are popular seasonal decorations. Every year in the US, approximately 70 million poinsettias of many cultivated varieties are sold in a six-week period. Many of these poinsettias are grown by the Ecke family business, which serves half the worldwide market and 70% of the US market.

It has been said that this plant brings good luck to whoever is the give if handled with affection.

What colors do poinsettias come in?

Red is the most popular color, accounting for roughly three-quarters of all sales nationwide, followed by white and pink. The more than 100 varieties of poinsettias come in a range of colors from red, salmon, and apricot to yellow, cream, and white (but not blue—these are a designer color created with dyes). There are also unusual speckled or marbled varieties with several colors blended together. New varieties are introduced yearly.

How can poinsettias be kept all year?

Nothing says Christmas like a beautiful pot of poinsettias. Problem is, sometimes these gorgeous plants don't even last until Christmas Eve, completely crushing your holiday spirit. But with a few tips and tricks up our sleeve, your poinsettias can stay fresh long after the ball drops on New Year's Eve.

Place them in the right spot. Poinsettias are tropical plants, so adequate lighting and temperature are essential for the well-being of your bouquet. Make sure to keep your lush red flowers in some form of indirect sunlight, but don't let them get too close to cold windows or heating or air conditioning vents.

Maintain a room temperature between 65 to 70 degrees. Higher temps will shorten a plant's life.

Punch holes in the bottom foil cover so that water can drain into a saucer. When the soil feels dry to the touch, add more water, stat! Excess water will pool in your saucer, so make sure to dump that out after. Check on the state of your poinsettia soil daily.