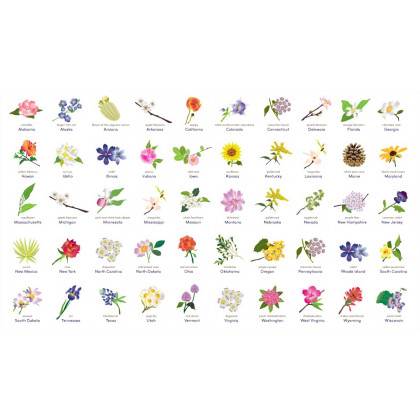 Learn more about the 50 different flowers of each state in the United States, listed from Alabama to Wyoming.

Alabama (Camellia):  On August 26, 1959, the state flower was changed to the camellia. Ladies in Butler County preferred the camellia since the goldenrod is a wildflower. They called the goldenrod a weed.
https://archives.alabama.gov/kids_emblems/st_flower.html

Arkansas (Apple Blossom): The apple blossom was adopted as the Arkansas State Flower by the General Assembly of 1901. Apple blossoms have pink and white petals and green leaves. At one time Arkansas was a major apple-producing state. The town of Lincoln in Washington County hosts the annual Arkansas Apple Festival.

California (California Poppy): On March 2, 1903 the California poppy, Eschscholzia californica, became the official state flower of California. The plant's bright orange flowers are an unmatched symbol of the Golden State, perhaps viewed as a floral representation of the “fields of gold” sought during the gold rush.

Colorado (Columbine): The white and lavender Columbine, Aquilegia caerulea, was adopted as the official state flower on April 4, 1899 by an act of the General Assembly. In 1925, the General Assembly made it the duty of all citizens to protect this rare species from needless destruction or waste. To further protect this fragile flower, the law prohibits digging or uprooting the flower on public lands and limits the gathering of buds, blossoms and stems to 25 in one day.

Connecticut (Mountain Laurel): Designated as the State Flower by the General Assembly in 1907. the Mountain Laurel is perhaps the most beautiful of native American shrubs. Its fragrance and the massed richness of its white and pink blossoms so vividly contrast with the darker colors of the forests and the fields that they have continually attracted the attention of travelers since the earliest days of our colonization.

Delaware (Peach Blossom): Adopted on May 9, 1895, after farmers and schoolchildren petitioned the General Assembly.  Beginning in the early 1800s, Delaware became a leading producer of peaches until a blight called "the yellows" destroyed the orchards in the late 1800s.

Florida (Orange Blossom): The blossom of the orange tree (Citrus sinensis) is one of the most fragrant flowers in Florida. Millions of these white flowers perfume the atmosphere throughout central and south Florida during orange blossom time. The orange blossom was selected as the state flower by the 1909 legislature.

Georgia (Cherokee Rose): The Cherokee Rose, having its origin among the aborigines of the northern portion of the State of Georgia, is indigenous to its soil, and grows with equal luxuriance in every county of the State.

Hawaii (Yellow Hibiscus): The beautiful bright yellow flower with wide petals. Don’t ask me why it isn’t the well-known Red Hibiscus, but it’s the yellow one, maybe it’s more like bright Hawaii sunshine, who knows? Interesting, the Yellow Hibiscus grows the highest up (400-2,600 ft.) of all Hibiscus in Hawaii.

Idaho (Syringa ): The Syringa (Philadelphus lewisii) was designated the state flower of Idaho by the legislature in 1931. The species name ‘lewisii’ honors Meriwether Lewis of the Lewis & Clark expedition. Lewis wrote of the plant in his journal. It is a branching shrub growing 3 to 10 feet tall, with clusters of white, fragrant flowers. The blossoms are similar to the mock orange.

Illinois (Violet): Illinois designated the violet (Viola sp.) as the official state flower in 1908. Violets are found growing on the prairie and on lawns, and also in the woods and wetlands of Illinois.

Indiana (Peonie): The peony (Paeonia) was adopted as the state flower by the 1957 General Assembly. From 1931 to 1957 the zinnia was the state flower. The peony blooms the last of May and early June in various shades of red and pink and also in white; it occurs in single and double forms.

Iowa (Wild Rose): The 26th General Assembly designated the wild rose as the official state flower in 1897. It was chosen for the honor because it was one of the decorations used on the silver service which the state presented to the battleship USS Iowa that same year. Although no particular species of the flower was designated by the General Assembly, the wild prairie rose (rosa pratincola) is most often cited as the official flower.

Kansas (Sunflower): A September drive across Kansas is colored golden by the state's flower. Those large yellow faces are nearly as brilliant as the sun. The young plants even track the motion of the sun, turning their faces as the day progresses.

Kentucky (Goldenrod): Before goldenrod, there was bluegrass and, unofficially, the trumpet vine. In fact, the trumpet vine was assigned by the United States War Department as the official symbol for the Kentucky militia.

Louisiana (Magnolia): Louisiana by legislative action, approved July 12, 1900, designated the magnolia [Magnolia foetida or Magnolia grandiflora] as the State flower. It was chosen probably because there is such an abundant growth of this tree throughout the State.

Maine (White Pine Cone): The white pine (also the state tree of Maine) is considered the largest conifer in the northeastern United States. Maine's nickname is "the pine tree state" and the eastern white pine appears on the state flag, seal, and Maine quarter.

Maryland (Black Eyed Susan): The Black-eyed Susan or Rudbeckia hirta is the state flower of Maryland. Its scientific name is Rudbeckia hirta. It belongs to the Asteraceae family.

Massachusetts (Mayflower): Massachusetts adopted the mayflower as the official flower of the Commonwealth in 1918. The fragrant, delicate mayflower (Epigaea regens) has been on the endangered list since 1925. Also known as ground laurel or trailing arbutus, mayflowers prefer sandy or rocky soil, under or near evergreens.

Michigan (Apple Blossom): The apple blossom blooms on the apple tree. It has been an official state symbol since 1897 and was noted as one of the most fragrant and beautiful species of apple.

Mississippi (Magnolia): The magnolia was officially designated as the State Flower by the 1952 Legislature. In 1935, the Director of Forestry started a movement by which to select a State Tree for Mississippi, to be selected by nomination and election by the school children of the State.

Missouri (White Hawthorn Blossom): On March 16, 1923, Governor Arthur M. Hyde signed a bill naming the white hawthorn blossom the official state floral emblem of Missouri. Known as the "red haw" or "white haw," the hawthorn (crataegus) is a member of the great rose family, which resembles the apple group. The hawthorn blossoms have greenish-yellow centers and form in white clusters. More than 75 species of the hawthorn grow in Missouri, particularly in the Ozarks.

Montana (Bitterroot): Montana designated bitterroot (Lewisia rediviva) as the official state flower in 1895. Bitterroot can be found during spring and summer, growing in the sagebrush plains and the foothills of the mountains in western and south central Montana.